After almost 33 years I have finally completed* my first model railway layout. It's an N-scale layout based upon a mountain village in the Japanese Alps. It was inspired by a rail journey between Nagoya and Toyama via Takayama through gorgeous mountain scenery, from along the Hida river, past cherry blossoms and up into the snow of the mountains.

I was given a train set for my first birthday, a high quality Märklin set that I still own. I was too young for it, of course. Since then I've set up various layouts, but none has been of a permanent nature.

On our third trip to Japan I purchased some relatively cheap N-scale trains as a souvenir. On subsequent visits I built up the collection further. I bought scenery, buildings, started painting some, made a tiny toy layout to test out some ideas and lay a large elevated track loop around my desk at home for the shinkansen and Narita Express sets. But a proper layout just wasn't progressing.

Then I watched Spirited Away again, and realising that I couldn't visit Japan in the near future, was motivated to put one of my planned layouts together so that I could bring a little piece of Japan to me. 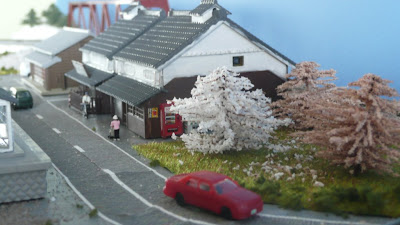 I already had an MDF board cut to size. On top of this I laid some thick sheets of polystyrene that I had kept from furniture packaging, just for this purpose. I cut a shape of a river into the polystyrene, down to the wood and used PVC glue to stick smaller chunks elsewhere to act as hills. I coated these chunks and the cliff walls with Selleys gap filler. The other flat areas I covered with a sheet of thin cardboard. The water in the river was a sheet of plastic "lake water" (Noch scenics, I think).

The white "snow" is just white paint, the green is grass matting. I used a stick on road. I am most pleased with the cherry blossom trees, which I bought in Japan. The name Fukunosawa just comes from one of the stickers that was included with the station platform kit. I don't think that it is a real place.

I was just going for a general impression of reality rather than going to extreme efforts for realism, but I have to say I'm surprised with how good the results look. Now, if only I could go and see the real thing again…